Greubel Forsey pays tribute to its artistic and architectural approach with a creation that sums up and magnifies its true spirit.

Following on from the brand's previous Art Pieces, the Art Piece Edition Historique houses within its 44 mm-diameter case a new movement with a variation on the theme of the Double Tourbillon 30°: a mechanism designed to enable the balance wheel to oscillate consistently in all planes ensuring maximum precision. 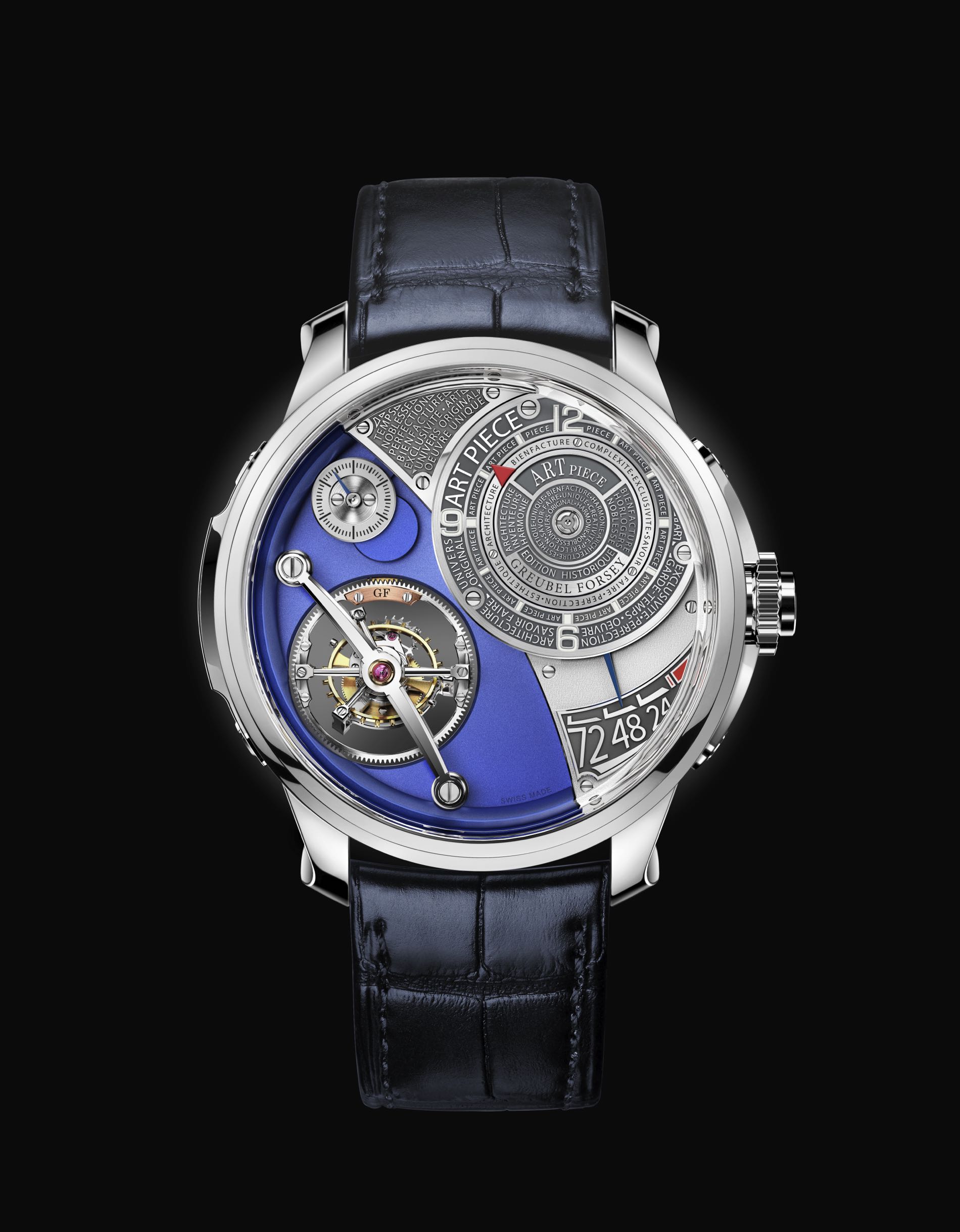 The most eye-catching aspect of all is the multi-level construction that opens up whole new vistas. The gaze is first drawn to the Double Tourbillon 30° majestically set against a royal blue background, with the flat black polished bridge and hand-bevelled and open-worked cage pillars. It is a veritable sculpture in motion, with its inner tourbillon inclined at a 30° angle performing one rotation per minute and its outer tourbillon completing a revolution in four minutes. 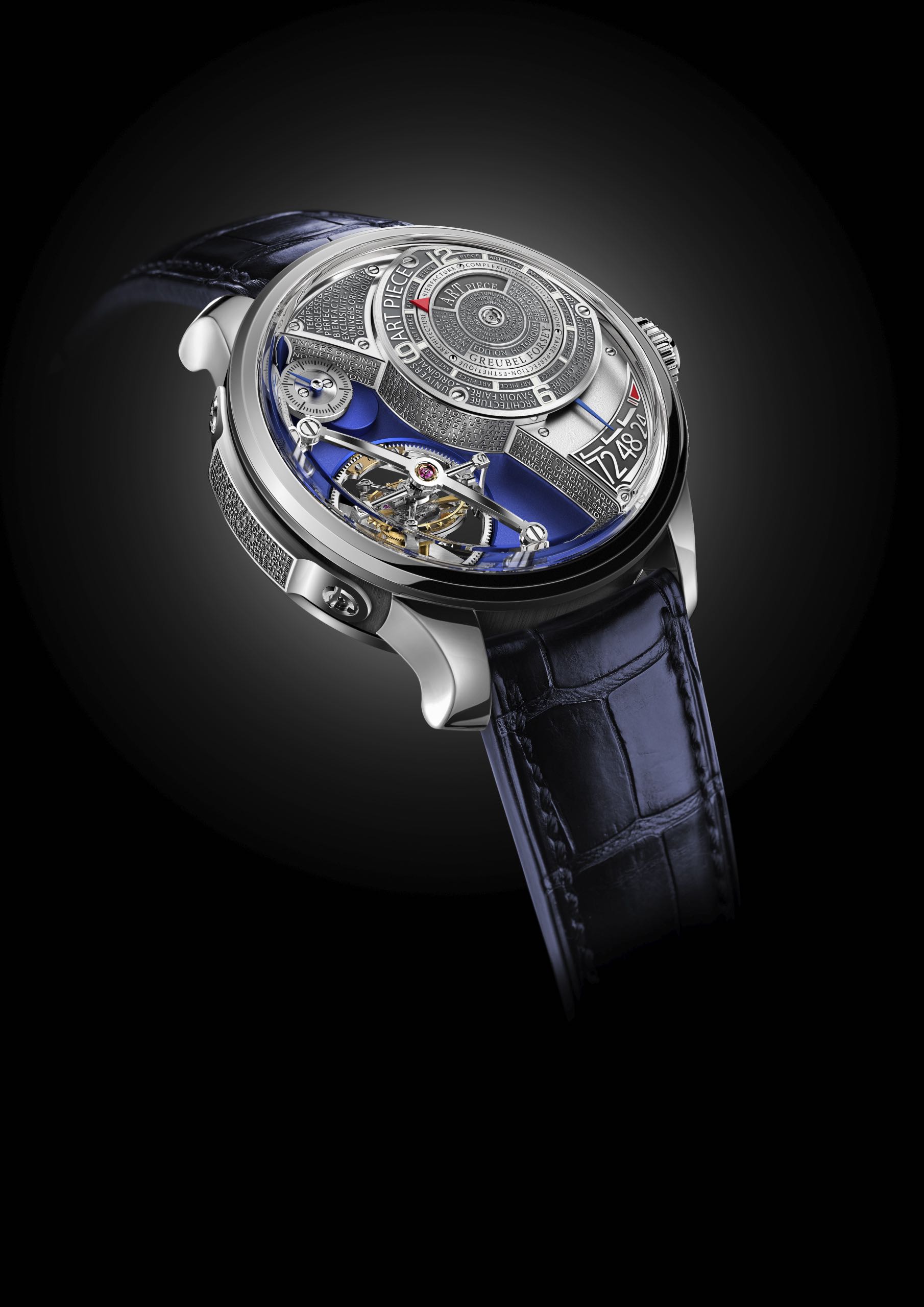 The small seconds dial is positioned on the same level, between 10 and 11 o'clock. Lifted onto a significantly higher plane, the power-reserve indication bears large Arabic numerals and a blued steel hand. Higher still, at 2 o'clock, the offset hours/minutes subdial has been replaced with a daring titanium dome featuring a hand-punched background entirely engraved with the finely polished Greubel Forsey key values.

The hours are discreetly displayed by a red hand on a separate rotating ring, while the minutes appear on request through an aperture thanks to a simple press on the crown-fitted pusher.

By giving pride of place to the tourbillon and power reserve in relation to the hours/minutes indication, the Art Piece Edition Historique asserts itself as a 'philosophical timepiece.' It draws the collector to experience a new relationship with temporality, based on a deeper consideration of the time passing and the time that remains. A true ‘carpe diem’ invitation to make the most of the moment in hand. 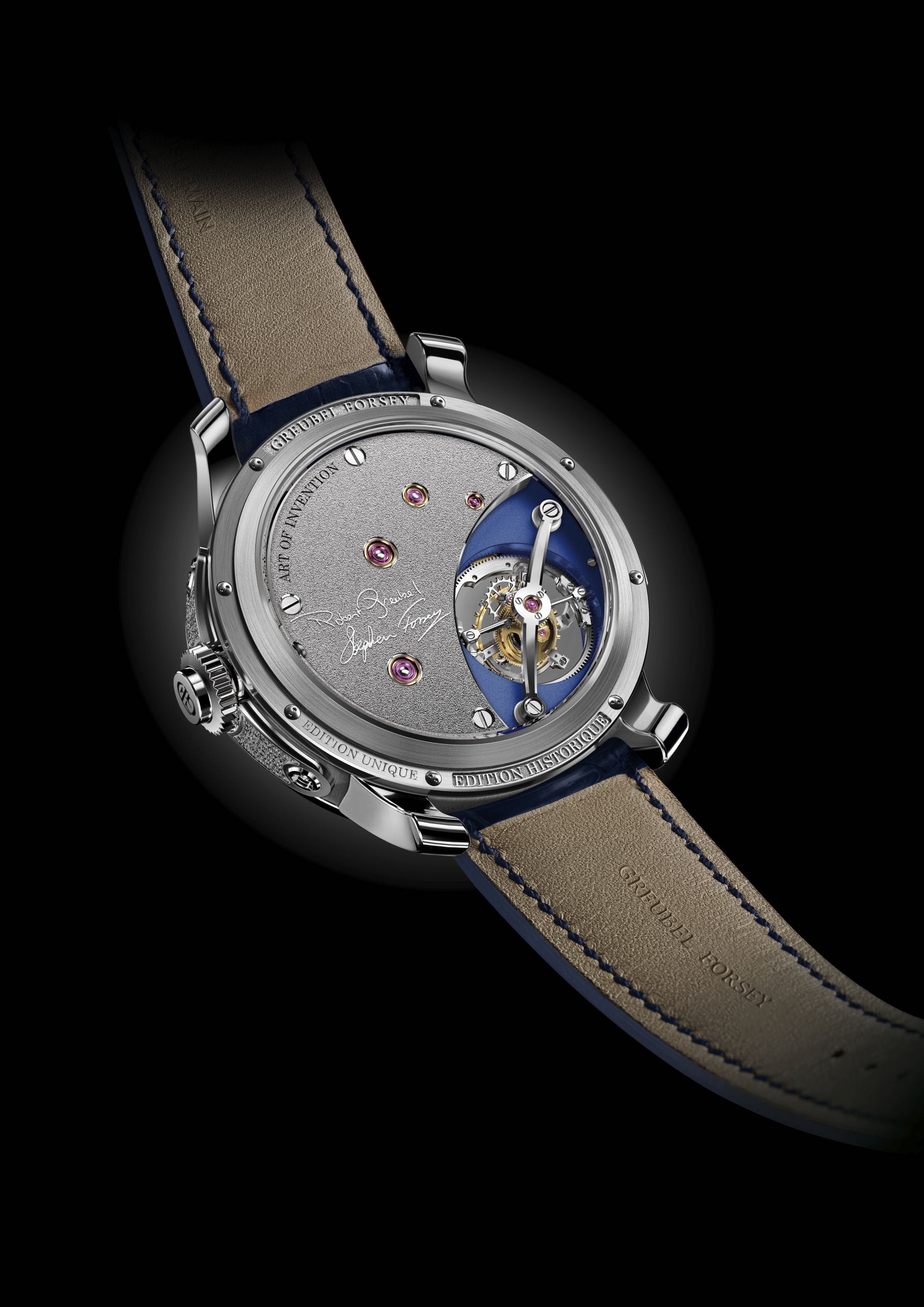 The caseback also offers a most original design, a rear view of the Double Tourbillon 30° surrounded by the barrel bridge where one can admire the jewels in gold chatons and the hand-polished countersinks, completed by the relief-engraved signatures of Robert Greubel and Stephen Forsey.

Within the strictly limited 33-piece edition, the first 11 Art Piece Edition Historique timepieces are to be made in platinum and the 22 subsequent ones in different materials. Enhancing the sense of continuity with the other Art Pieces, Greubel Forsey has chosen to encompass the 18 previous examples within the total to date.

The 11 platinum Art Piece Edition Historique models will thus be numbered from 19/51 to 29/51 – figures appearing both on the caseback and on the small plate alongside the Double Tourbillon 30°.