It has been ten years since the Octo collection made its acclaimed entrance into the world of Haute Horlogerie. Its technical feats, its instantly recognisable shape and its pure design have raised it to the rank of a watch industry icon. This understated and modern masculine interpretation embodies Bulgari’s two identities: Swiss horological excellence and inimitable Italian style.

In the space of a decade, the Octo collection has become a true icon of contemporary watchmaking, acknowledged both by watchmaking experts and by fans of minimalist design matched by absolute technicality. Witness the 60 or so international prizes awarded to the collection, including the "Aiguille d'Or" – the Best in Show award – at the latest Grand Prix d’Horlogerie de Genève.

This meteoric rise underlines Bulgari’s ability to combine different worlds, as well as revealing the power of blending Swiss watchmaking expertise with Italian elegance. This exclusive union was presented in Rome in July 2012 and rapidly confirmed Bulgari’s role as a pioneering brand through three linesrepresenting as many expressions: Octo L’Originale (2012), Octo Finissimo (2014) and Octo Roma (2017).

Right from its creation, the powerful Octo L'Originale asserted its charismatic personality and its unique style. Neither round nor square, it harmoniously combines two fundamental shapes and formed an octagon – the geometry of perfection. Its eight-sided architecture is directly inspired by the geometrical motifs adorning the arches of the Pantheon in Rome. It proclaims the collection’s unwavering link to the heart of Bulgari’s heritage, rooted in this Roman spirit. The identity and the pure design of the Octo redefine the codes of men’s luxury watches.

Launched in 2017, the Octo Roma watch symbolises the purest interpretation of the Bulgari take on the octagonal shape. This modern, urban and refined model elegantly has found its place in this powerful range by adding a new, subtly balanced formal dimension. An inimitably stylish focus on essentials is the secret of its timeless and harmonious lines ensuring peerless comfort.

Since its emergence in 2014, the Octo Finissimo collection has redefined traditional Haute Horlogerie, reinterpreting classic and sophisticated watch complications in a resolutely contemporary manner symbolising Bulgari’s own Estetica della Meccanica: the art of absolute innovation in form as well as in substance. 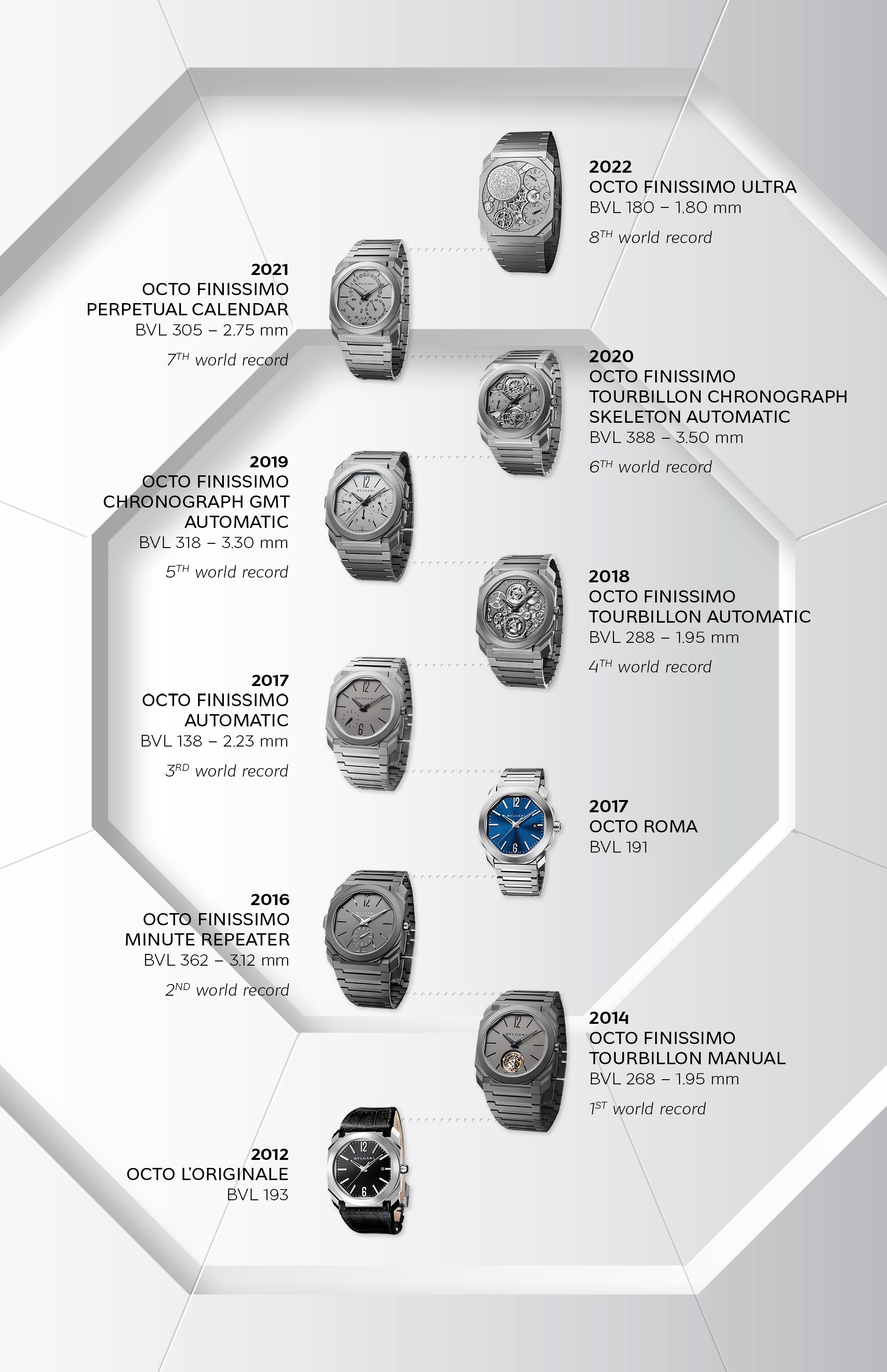 To celebrate the tenth anniversary of the Octo collection, Bulgari has launched the Octo Finissimo Ultra – at just 1.80 mm thick – setting an eighth record as the thinnest mechanical watch in the world, 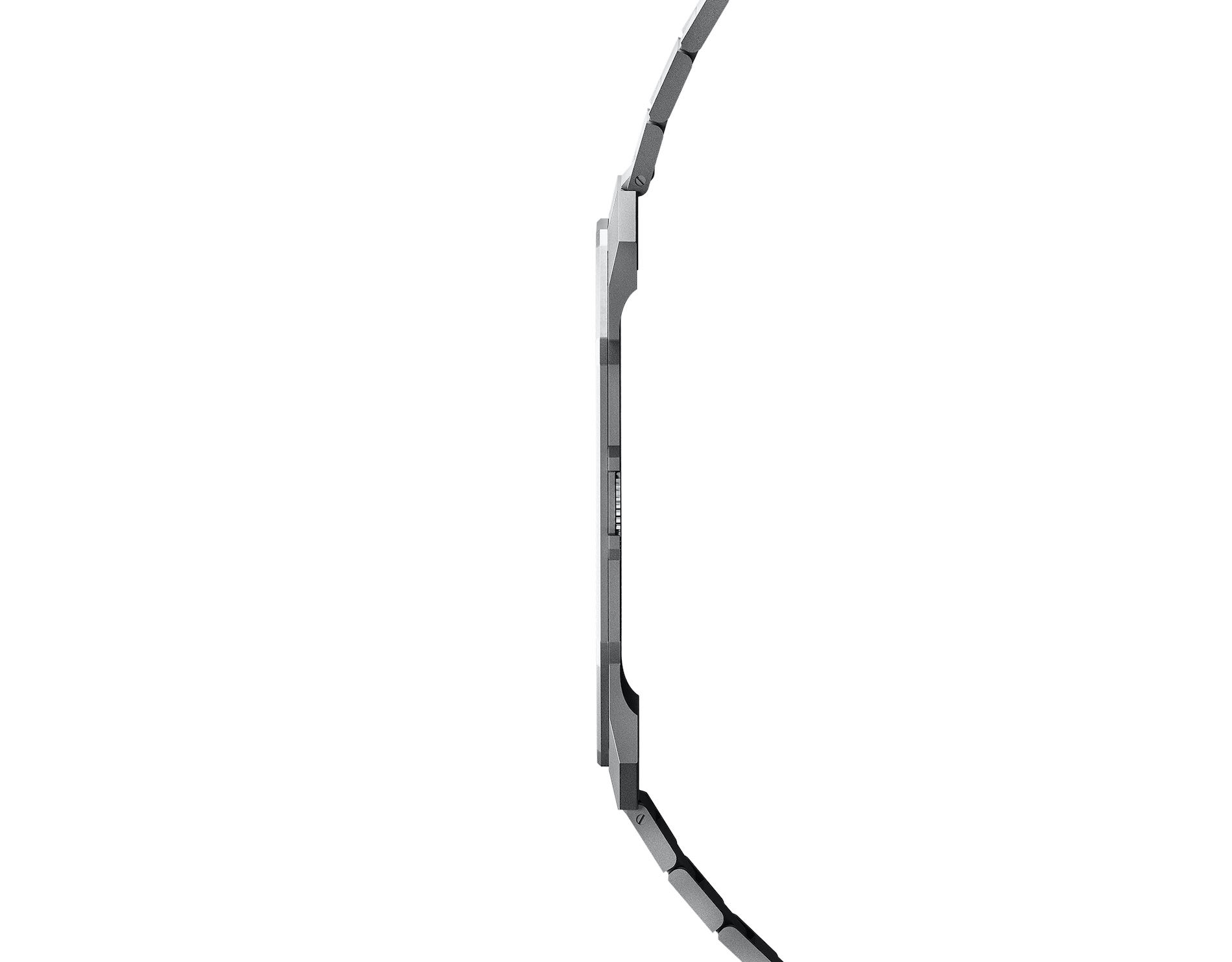 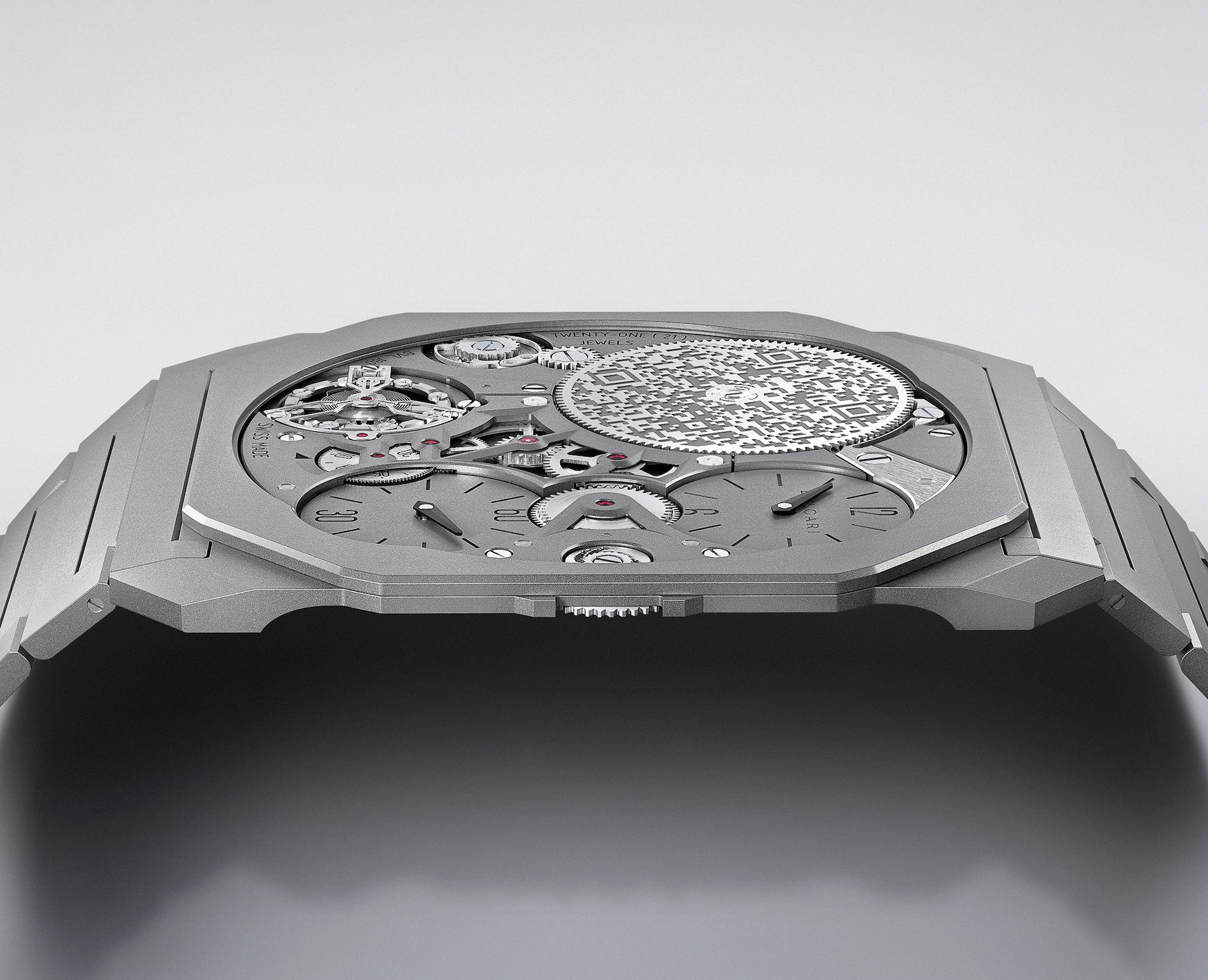 "This fabulous benchmark that we are setting today with the Octo Finissimo Ultra is in fact for me and for all the teams an apparently impossible dream come true," notes Jean-Christophe Babin, Bulgari CEO. "One that guarantees that Bulgari will forever be recognised as a company that has written some of the finest pages in Swiss watchmaking. And the fact that this is an Italian house makes us particularly proud." 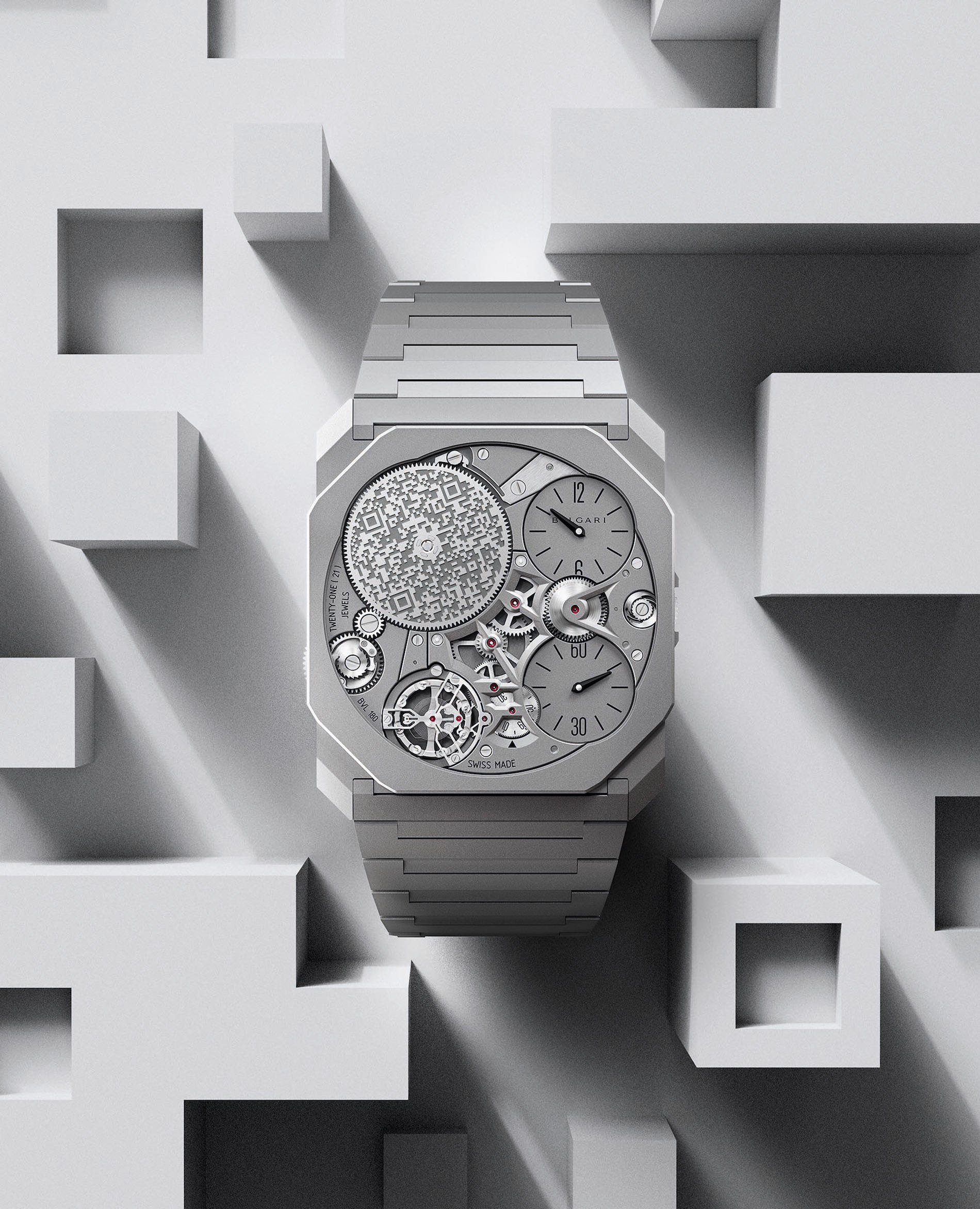 As its name suggests, Octo is the story of a lucky number, of an Italian identity, but also of the endless quest for new mechanical prowess, of records galore– and now of a door opening onto new worlds. Octo is of course eight facets, eight world records in eight years, but it is also about coming full circle, a chapter that is closing and new pages to be written – brimming with promise as it launches on the first day of spring in 2022.

To celebrate this icon of slimness and style, the House unveils two-anniversary limited editions that go back to the roots of its conception: the first sketches made by Bulgari’s Product Creation Executive Director, Fabrizio Buonamassa Stigliani 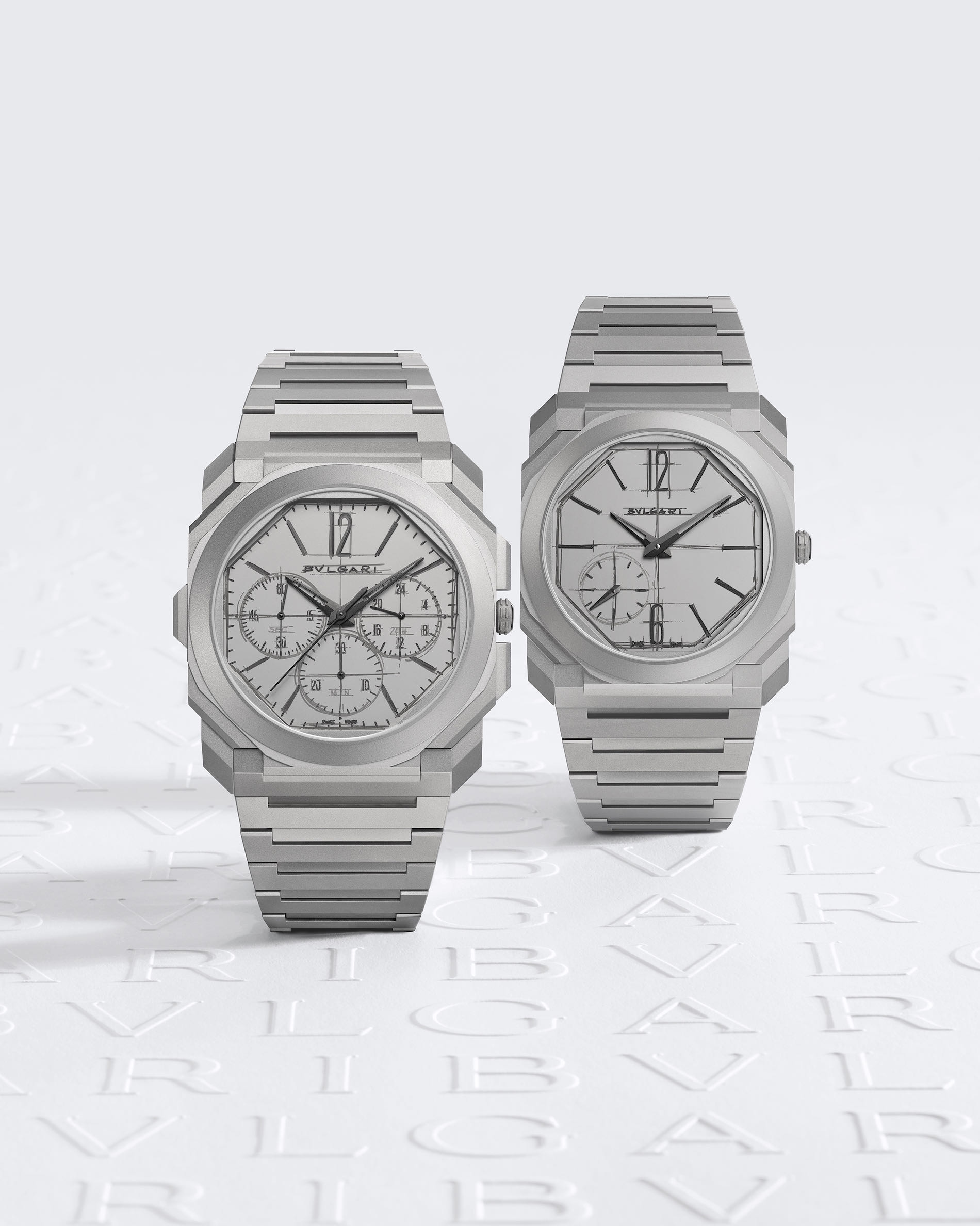 Embodying the aesthetic signature of the Finissimo collection, the case, dial and bracelet are crafted from ultralight titanium, ensuring a modern look and peerless elegance. 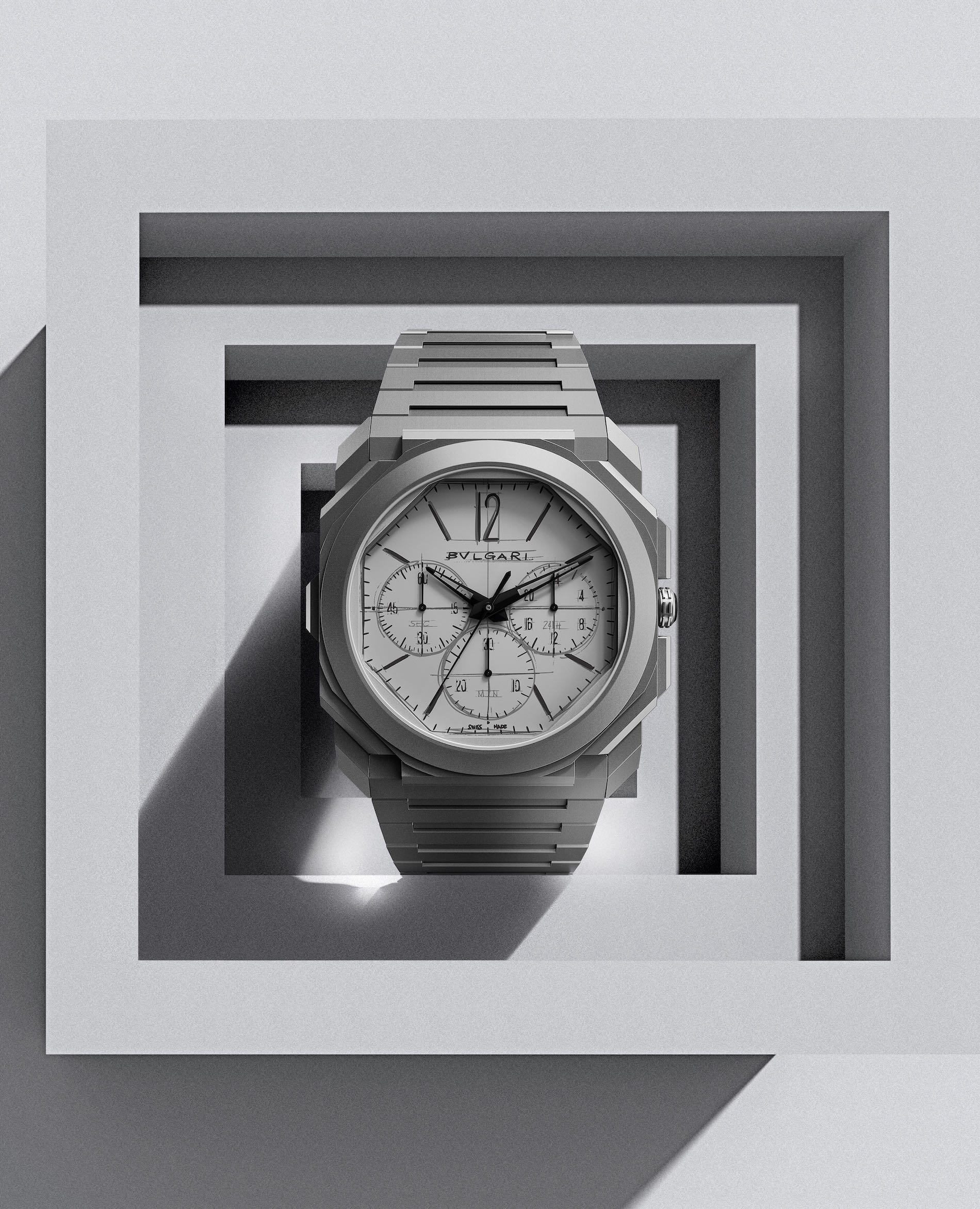 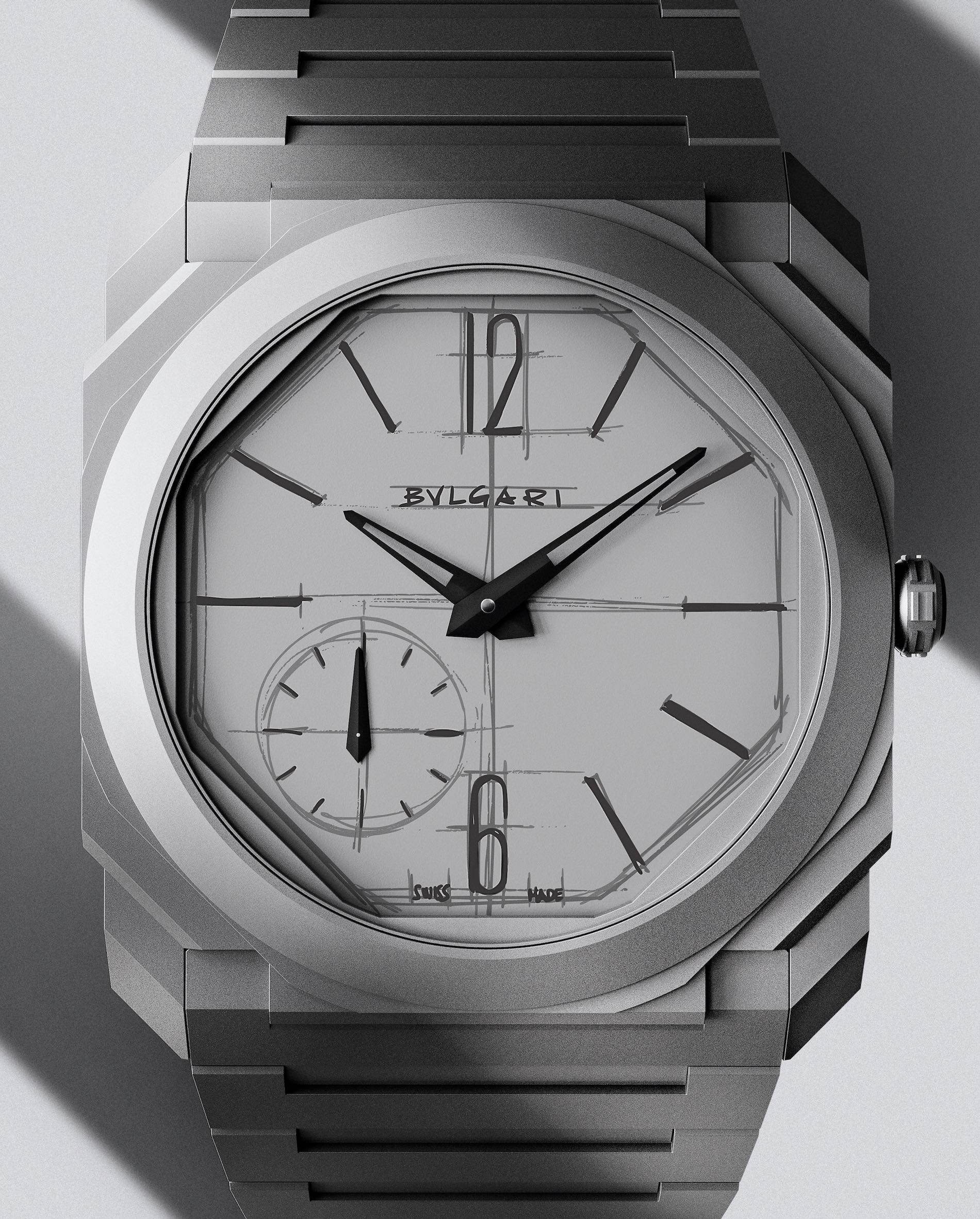 The strong and bold lines of the case, inspired by Italian architectural masterpieces, express Bulgari's Roman roots, while the play of light in its facets catches the gaze.

The sandblasted finish of the titanium contrasts with the black PVD-treated hands, the hour-markers, the Bulgari logo and the engraved small seconds counter, reproducing Fabrizio Buonamassa Stigliani's early sketches.

Topped by a ceramic-set crown, the sleek 40 mm-diameter case is teamed with a smoothly integrated bracelet composed of supple links, prolonging the sense of comfort and lightness on the wrist.